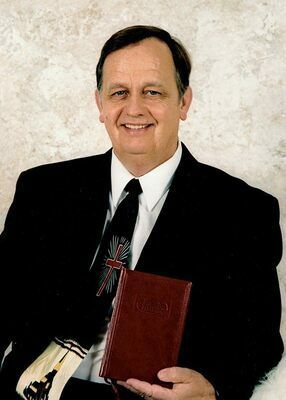 Pastor Teddy Glen Phillips, 75, was finally healed from his earthly body and went home to be with his Lord and Savior on Tuesday, January 10, 2023, at Holston Valley Medical Center in Kingsport, Tennessee, surrounded by his loving family.

He was born in Dante, Virginia; son of the late Banner and Agnes Hurd Phillips. He was preceded in death by two brothers, Bill Phillips and Arthur Phillips; and two sisters, Dorothy Amos and Hazel Barnette.

He was a Veteran of the United States Army, serving in the Vietnam War where he earned the National Service Defense Medal. He later worked in the coal mines for several years. He was employed by MSHA for thirty-three years when he retired as a mine safety and training expert.

Ted had a fervent love for the Lord. He spread his love for the Lord to many people over the years, traveling the country and giving lectures. He enjoyed preaching and taking care of his family and friends. His church, The House of the Lord, Little Jerusalem, was his passion. Ted and Charlie Hileman had a vision, and it came to pass on May 4, 1986, when the first church service was held there. He spent many hours visiting people who were sick at home and in the hospital and praying for their healing. His countless hours working and volunteering at the food bank at his church had a big impact on his little community and the people that he loved.

Funeral Services for Pastor Teddy Glenn Phillips will be conducted at 2:00 p.m., Friday, January 13, 2023, at the House of the Lord Church, Castlewood, Virginia with Pastor George Jordan and Evangelist Eddie Street officiating. Pastor Ted will be taken to the church one hour prior to the funeral service. Interment will follow in Temple Hill Memorial Park, Castlewood, Virginia. Military Rites will be conducted by Veterans of Foreign Wars, Disabled American Veterans, and the Virginia National Guard. Pallbearers will be Derek Phillips, Jordan Phillips, Dean Barnette, James Barnette, Randy Partin, and Chris Thompson. Honorary Pallbearers will be Ronald Hileman, Jimmy Johnson, and George Breeding.

The family received friends from 5:00 p.m. until 8:00 p.m., Thursday, January 12, 2023, at Castlewood Funeral Home, Castlewood, Virginia. In lieu of flowers, donations may be made in memory of Pastor Ted to the St. Jude Children’s Research Hospital, 501 St. Jude Place, Memphis, Tennessee 38105, or online at www.stjude.org/donate or the Jericho Shrine No. 180, P.O. Box 5548, Kingsport, Tennessee 37663 or online at www.jerichoshrine.com.

Online condolences may be sent to the Phillips family through our website and a video tribute may be viewed at www.castlewoodfuneralhome.com. Castlewood Funeral Home is in charge of arrangements.