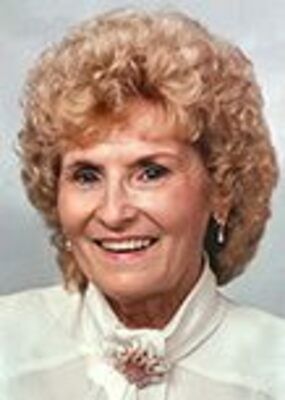 Gen finally arrived home to be with her precious Lord early Friday morning July 15, 2022.  She was born April 19, 1925, in Chicago, IL to Florence and Edward Jiru.

She was a graduate of Central High School in Madison, WI, a loving daughter to her parents, faithful wife, special sister, aunt, grandmother, great grandmother and her most cherished role, mother. She was brought south to Coeburn, VA as a young bride by her beloved husband, Bill Hunsaker, to create and raise a loving family and brood of children.

Her children were her greatest joy, and she lived her life to support their dreams. She was an Avon lady, gardener, carpool driver, singer with the Beach Tones and other choral groups, and was very active in her beloved Catholic church. She spent many hours volunteering wherever she was needed in hospitals, schools, senior homes, and churches.

In the early 1950’s, she gathered the few Catholics around Coeburn and began having Mass celebrated in her home, led by Glenmary priests who were sent to remote areas of Appalachia. Gen’s determination inspired the building of St Mary’s Catholic Church. It was a family effort: her father donated the church organ and tabernacle.

Gen served with the Coeburn Civic League and Wise County Boots and Saddle Club, and passionately worked to establish her husband’s business, Hunsaker Electric Company. A few years after the untimely death of Bill, and after she moved her family to Bristol and owned a store, The Oracle, she met and married Billy Buchanan. They moved to Chesapeake, VA and enjoyed many fun times with Billy’s brother and sisters and their families. After Billy’s death and always the romantic, Gen married Charlie Kelly when she was eighty-three years old. She lived her last few years as the queen of her son David and Barbara’s tomato farm in Hanover County, VA where she was lovingly cared for by two hospice angels, a faithful eucharistic minister, and priests from St Ann’s Catholic Church in Ashland, Va. and made many friends who remain dear to her family.