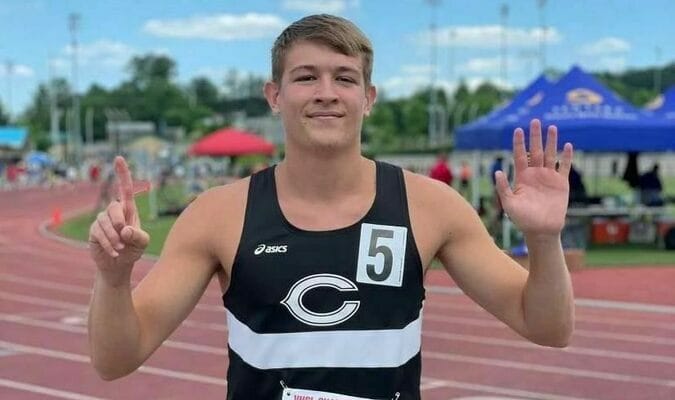 Maddox Reynolds holds up six fingers, representing the amount of state championship rings he won in his career after the 2022 VHSL Class 2 state track and field meet. SUBMITTED PHOTO 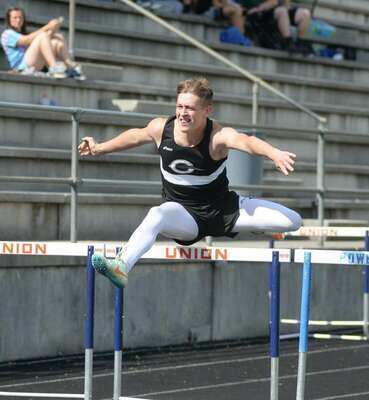 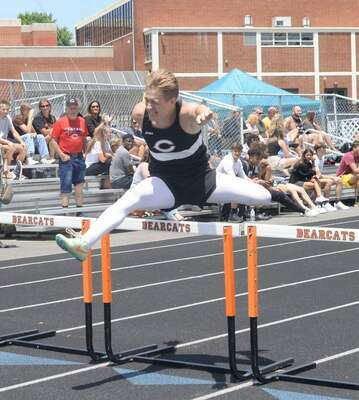 Maddox Reynolds was victorious in the Region 2D 110-meter hurdle race earlier this year. PHOTO BY KELLEY PEARSON
Previous Next

“I never really worried about those hurdles. They were just standing there, and I was always zooming past them just to get back on the ground again.” — Rodney Milburn, 1972 Olympic 110-meter high hurdle champion.

Central’s Maddox Reynolds may have started competing in track in the seventh grade only to improve his quickness for football, but it was very apparent to everyone watching that he possessed something special when he decided to give the hurdles a try one day.

“He was very interested in the (jumping) field events: high jump and long jump as well as sprints,” Central head track coach Jason Mullins said. “One day we set up the hurdles to let all the kids try it. He was a natural and was hooked from then on.”

Reynolds, who described himself as an average athlete during his seventh grade track season, became very interested in trying the hurdles as he was one of the athletes who helped clear the track after the event.

“One day in eighth grade, I saw the varsity guys jumping them and I thought about how I wanted to try it, too,” Reynolds said. “One of the coaches saw me and told me I was competing in the hurdle event the next week. Ever since then, I’ve been training for the hurdles.”

Reynolds grew up playing football, baseball and basketball with football as the primary focus. He excelled as a running back and looked to picking up some quick foot races during track in the spring to accentuate his fall performances on the gridiron.

“I was just trying to gain speed and flexibility. Our track coach was all about agility, so that was the main goal when I started out. But, I quickly found my purpose in track,” Reynolds said.

Coming from a highly athletic family, Reynolds is quick to give credit to family members for inspiring him and pushing him along the way.

His grandfather Joe Reynolds was also a champion hurdler at Pound High School. He undefeated in 1959, which was the first year that Pound had a track team. Even though there was no hurdle event in the district championship, he remained undefeated all of his high school years (through 1962). He was so devoted to his sport that he actually made hurdles for the school during shop class.

First cousins Trey Meade and Gavan Meade played college football at UVA Wise and Ferrum, respectively. His cousin Logan Reynolds set several school records for girls basketball at Central High school before playing at James Madison University. Both his grandfather Joe and his aunt, Cristal Reynolds, went to East Tennessee State University for track. It would be easy to say that natural athleticism runs through his veins.

After letting baseball fall by the wayside, Reynolds opted to focus all of his energy to football and track. In his freshman year, he completely dominated his events winning the state championships in 55-meter hurdles during the winter indoor track season and then the 110-hurdles in the spring track season. Reynolds was riding high on a wave of success that should have carried him through his sophomore year when two crushing turns of event were handed to him without warning.

In the fall, during the third football game of the season, Reynolds severely injured his knee.

“We were punting and I was a runner. I tried to juke out one of the other players. He didn’t touch me, my knee just completely dislocated,” Reynolds said. “A doctor came out onto the field to put it back in place. I was sure I had torn everything in my knee just because of how bad it looked when I was sitting there.”

Initially, Reynolds refused to leave the sideline to go to the hospital. A consummate team player, he was insistent he stay and cheer on his team. But, when the pain became unbearable, he relented. He immediately began rehabbing his injured patella, and through dedication and hard work, was able to return at the end of the football season. He was able to continue on to indoor track where he won his third state championship in the 55-meter hurdles. But then, the second shoe dropped.

The COVID-19 pandemic robbed so many athletes of the ability to finish the year as the VHSL was forced to cancel the entire spring sports season. Reynolds, who had looked to add number four to his ring collection, was devastated.

“I knew I could go out there and compete and potentially get another ring,” Reynolds said. “I love competition and always want to move on to the next thing. Now, all I could do was sit and wait for next year to roll around.”

After continuing his rigorous training schedule throughout the summer and fall, he was able to win his fourth state championship overall in the 55-meter hurdles during the indoor track season.

Reynolds was ready to move into football for the COVID-shortened spring season. The Warriors were touted as potentially having one of the best teams in school history and Reynolds was excited to be a contributing part of that. But, he would be forced to deal with more pain and disappointment as another even more traumatic injury befell him.

“My knee popped against Ridgeview and my patella tore again,” Reynolds explained.

Determined to not miss almost an entire season of football again, he continued to play in games with his knee braced and heavily taped. During one of the later season games against Union, the brace and tape could not hold up against another attempt at an agile dodge.

“It was the same thing. I tried to juke someone out again as well as getting hit out of bounds. I tore my ACL and lateral meniscus right there,” Reynolds said.

He was unaware at the extent of the injury at the time as an MRI would only show that there was too much fluid in his knee to diagnose. Reynolds pushed forward through the pain with the intention of completing the football season as it melded directly into spring track.

“It was really rough. I was running around on this torn ACL and meniscus and my patella was still messed up, but I just put a brace on. I thought I could still do it,” Reynolds said.

He practiced extensively for the hurdles during the early parts of the track season. When the Mountain 7 District meet came around, he was ready mentally. But, his knee had other ideas.

“I was warming up and jumped my very first hurdle and my knee dislocated. I knew I had to go back to the doctor at that time,” Reynolds said.

Extensive radiography showed the multitude of injuries. Many athletes would choose to give up at this point, but after much soul searching and bedrest, Reynolds only saw the light at the end of the tunnel.

“I remember laying in bed and thinking I would never jump again. It hurt so bad. But, I had a choice to make. I could make excuses or I could find solutions. I decided I wasn’t going down without a fight,” Reynolds said. “I went to rehab every single day. I was rehabbing on my own, too. I just couldn’t sit and mope because that’s not who I am.

“They told me with a lot of therapy that I might be able to make it back for the spring track season. I told them I would be back in time for the winter track season. I will admit it was terrible. I couldn’t do more than jog for the first five months.”

The first few times he went to actually jump, both his body and his mind held him back.

“When I came out of the blocks, I felt like I couldn’t jump,” Reynolds said. “I had trouble pushing off because my knee still hurt really bad. But, I knew if I wanted to win, I had to keep practicing. Going from being number one to being the guy who can’t even get off the ground was something I had to overcome.”

Reynolds credits coach Mullins, his parents and his grandparents for keeping him motivated through the toughest of times.

“They just continued to tell me that I would get there, I just had to be patient. Even when I came home from a bad practice, they were always there for me and supporting me,” Reynolds said.

His hard work and dedication paid off in spades as only six months after his traumatic knee injury, he returned to win his fourth straight 55-meter championship this past winter. While ecstatic over the win, Reynolds still harbors regret that he was unable to participate in his senior year of football. But, he never missed a game or practice, instead choosing to be on the sidelines cheering on and supporting his teammates.

“My team has always pushed me, so I wanted to be there for them. These are guys I have been playing with since elementary school. We’re a family. Even though I was injured and unable to play, there was no way I wasn’t going to be there,” Reynolds said.

The 2022 spring track season was the cherry on top of an astounding career. Reynolds went undefeated throughout the season, culminating in his sixth state championship in as many races in the 110-hurdles as well as being almost completely pain-free.

“I had people messaging me this year telling me not to race because I might hurt myself or I might go out there and lose. But, losing wasn’t an option. I had been through too much and pushed myself too hard to get back to where I wanted to be,” Reynolds said.

As a constant on the sidelines of the football field and the track despite his injuries, Reynolds became a leader. He found joy in supporting his teammates and helping younger folks out, whether it was with football moves or hurdling forms.

“Even when he was hurt, he would show up to practice to encourage his teammates. A lot of our younger kids that are running now aspire to be the next Maddox Reynolds,” coach Mullins said.

“I want to leave a legacy,” Reynolds said. “There’s several people I have been teaching who have shown a lot of potential. There’s a lot of kids looking up to me and I want to help them to be as good as they can. I want Central to have a great program for years to come.”

After discovering his love of instructing and assisting those around him, a future in coaching is definitely in the works for Reynolds.

“Oh, I hope I can coach. I am definitely going to try to be that guy. I want to be the person who helps others live up to their full potential,” Reynolds said.

After speaking with several colleges and universities, Reynolds has decided to stay home and attend UVA Wise. He will be part of the Cavs’ inaugural track and field team.

“I’m thankful for everything, for all of my opportunities. The glory goes to God because I could not have done any of this without Him,” Reynolds said.

Broken records: Emmah McAmis is living up to an...

Eastside controls all facets of the game in dru...