James Mitchell is headed to Detroit 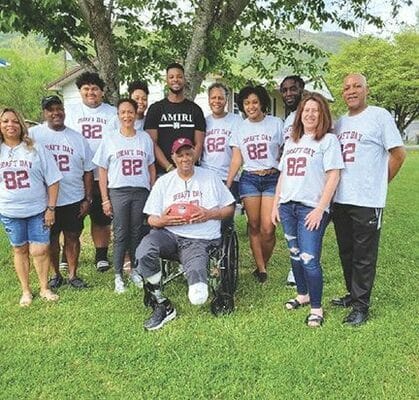 James Mitchell (center) poses with members of his family this weekend as he waited on the call.

“The Governor” is on his way to the Motor City. That’s just fine with James Mitchell, who was chosen by the Lions as the 177th pick in the fifth round of the 2022 NFL Draft.

“I’m just very grateful for the opportunity to go to Detroit and learn and show what I can do,” Mitchell said via text message.

Mitchell opted to declare for this year’s draft after an abbreviated senior season. He played in just two games before a falling victim to season-ending ACL injury during the second quarter of the Middle Tennessee State game.

Coming off the injury, Mitchell talked about the anticipation as he was waiting on the call to come.

“It’s been a very emotional weekend for me and my family and we’re just happy that I’m getting a chance to do what I love at the highest level,” Mitchell said.

“I am happy for James and his family. It’s a great day to be a Union Bear fan and a James Mitchell fan,” Union head football coach Travis Turner said.

Mitchell received all state honors all four years at Union High School. In his senior season, he switched from the tight end position to quarterback due to injuries on the Bears’ roster.

“He is a professional football player who will represent his community and family in the right way. The Detroit Lions are getting a great teammate an excellent football player!” Turner said.

The call came to Mitchell as the pick was announced around 3:30 p.m. on Saturday.