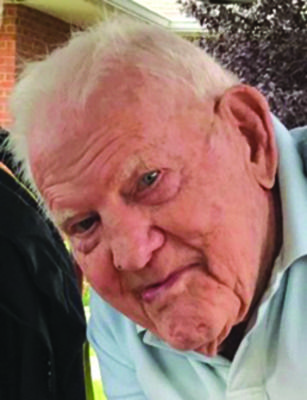 Douglas Fairbanks Hale, 95, of Coeburn, passed away on Wednesday, September 8, 2021 at his residence at The Laurels Assisted Living and Retirement Home in Norton.
Doug was born on December 12, 1925 in Clinchco to Benjamin Harrison Hale and Ava LaRue (Kern) Hale. He joined the Navy November 9, 1943 during WWII and he was a survivor of the Normandy Beach Invasion.
His love of boxing started at the age of 18 and grew into a professional career until the age of 46. He continued the love of the sport by starting boxing clubs in several areas of Southwest Virginia. He was a retired coal miner. He spent days, after his retirement, on the Guest River Gorge walking, jogging and keeping the trail clear of debris for others to enjoy along with sharing his wealth of knowledge about the history of the trail until the age of 88.
He always enjoyed spending time with his children, grandchildren and all their friends. Swimming and camping on the Guest River was a favorite thing of all. He was an exceptionally spiritual man and made it known that one day he would meet back up with us all on “God’s Golden Shores.”

He was preceded in death by a daughter, Belinda Wright of North, Va.; twin daughters, Roma Gaye and Naomi Faye, that were with Doug and Lula Mae for only an hour on this earth before gaining their wings; his grandson, Robert “Bobby” Cassell of Gloucester; his mother and father, Harrison and “Avie” Hale of Crab Orchard; brother, Lonnie Hale and wife Lillian of Vansant; sister, Delphia and husband, Clyde Vandyke of Vansant; brother, Allen Hale and wife Hortense of Crab Orchard; sister, Edna and husband Carlos McClain of Coeburn; sister-in-law, Faye (Powers) Hale of Wise; half-brothers, Charlie Kern and Brad Hale of Coeburn; three half-sisters, Nanny Harris of West Virginia, Minnie Mullins of Buchanan County and Gertrude Stanley of McClure.
Doug is survived by one son, David Hale and wife Libbey (Hillman) Hale of Coeburn; three daughters, Barbara and husband Wayne Buchanan of Hallieford, Va., Marlene Charles of Wise and Marsha Viers of Abingdon; 18 grandchildren, 32 great grandchildren and five great-great grandchildren; one brother, Hershel Hale of Wise; and several nieces and nephews.

A special thanks to everyone at The Laurels, you were all such a blessing to our dad. We will all greatly miss the patriarch of our family and will have a small family gathering to celebrate his life.
In lieu of flowers, please contribute to your favorite charitable organization.

Gilliam Funeral Home and Crematory is honored to serve the Hale family.