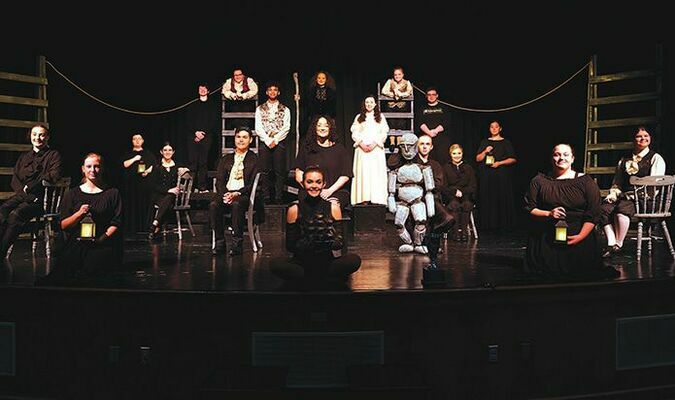 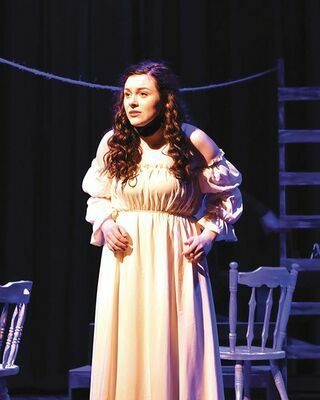 Hadassah White performs as Miranda, utilizing her vocal talents to sing some of her lines and to provide background vocals in different parts of the show. 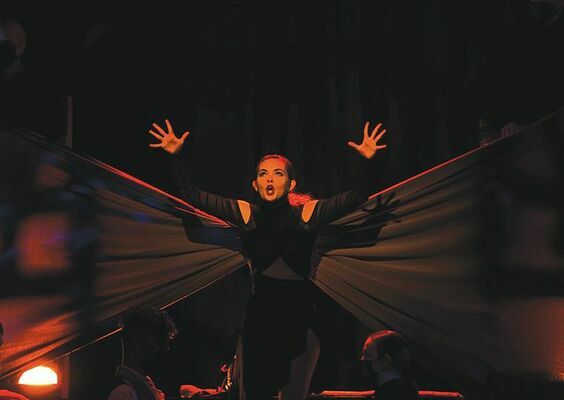 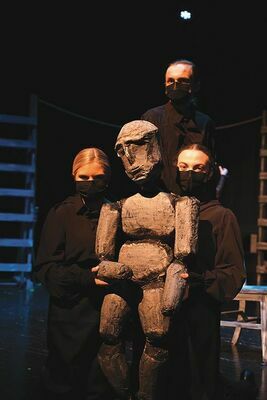 Dallas Meade was cast as the voice of Caliban and along with Caitlyn Shepherd and Kyleigh Harmon they perform in perfect unison to create the creature using a puppet designed and built by the students at Eastside.
Previous Next

Shane Burke’s name has been synonymous with success since he first began coaching the One Act program at Eastside High School. Under his guidance, One Act Teams from Eastside have earned VHSL State Championships in One Act competition for an unprecedented six consecutive years. Even as older students have graduated and left the program, Burke has constantly invested in the development of his younger performers to keep the future of One Act for the Spartans of Coeburn and St. Paul looking bright.

Normally a Fall sport, the Covid-19 Pandemic forced the delay of One Act competition until the Spring of 2021. With Forensics rehearsals occurring simultaneously for Coach Burke and many students who perform and compete in both activities, the challenge has been greater than ever. The decision of the Virginia High School League to make this year’s competition virtual furthered the already intense pressure of this demanding competition.

Schools from all around the Region had to submit a video of their show to the VHSL, so that judges could watch, review, critique and ultimately rank each play. Although tech and set are kept to a minimum, these components still create challenges in filming and capturing the action on the stage.

“It’s not the normal way we compete,” Coach Burke admitted. “However I have so much confidence in these students and in their ability to prepare and adapt to these new circumstances. It’s hard to rise to the occasion without the pressure of judges present or watching the other teams competing before your eyes. All we can do is work hard to prepare and execute on the stage.”

In a bold move, Burke chose to perform The Tempest by Shakespeare. Easily one of the best known plays in history, with countless versions and interpretations over the years, Burke acknowledged that this might be a risk, however the choice to do this play allowed the opportunity for several Seniors who are appearing in their final One Act show for Eastside to shine. Olivia Adkins leads the cast as Prospera, the deposed Duke of Milan. Hadassah White performs as Miranda, utilizing her vocal talents to sing some of her lines and to provide background vocals in different parts of the show.   Sarah Burke portrays Ariel, utilizing her skills as an accomplished dancer to portray her character’s supernatural abilities.   Dallas Meade was cast as the voice of Caliban and along with Caitlyn Shepherd and Kyleigh Harmon they perform in perfect unison to create the creature using a puppet designed and built by the students at Eastside. Katie Levy and Cloey Bailey provide comic relief as Trinculo and Stephano respectively. Kaitlyn Maine runs lights, while Colby Farmer and Joseph Tankersley contribute their skills to audio and sound effects

Prior to the team’s district round of competition, Senior Sarah Burke told her team, “Each one of you is amazing. It’s crunch time and you have all pulled together to make this special.”   Fellow Senior Olivia Adkins led her team in prayer just prior to the event, saying, “Thank You for the joy that You have given us in performing.”

After claiming the District Title, the Spartans set their eyes on the Regional championship.   The lights came down and the camera began to record.   One camera, one mic, with one view capturing the whole stage. No edits were permitted. Would the video prove effective to convey the emotion of the piece? Would judges be able to connect with the performers or would the physical distance impact their overall perception of the show?

As students gathered on a Zoom meeting to learn their fate on Friday, April 30, the team from Eastside was elated to hear their school announced as Region 1D Champions. With only one team eligible to advance to compete for the state title, this means Eastside now has an opportunity to extend their winning streak and add to their already record holding history as VHSL Class 1 State Champions.

Olivia Adkins, Malik Jallow (playing Ferdinand), Dallas Meade and Hadassah White from Eastside were all awarded with Outstanding Actor Awards and several other competitors from Eastside received honorable mentions. The team has been working this week to record and prepare to defend their state title.

Good luck to the Spartans as judging begins this weekend!

A century of Kiwanis

Burton finishes as runner-up in both girls and ...