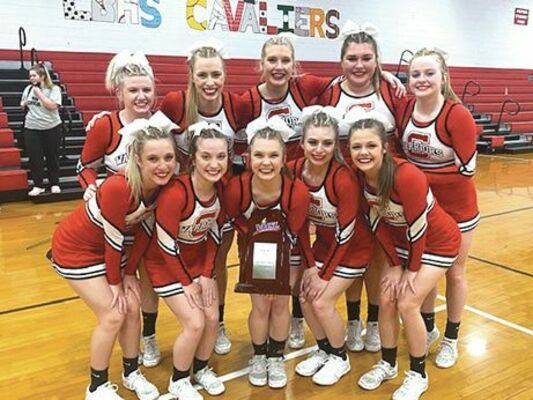 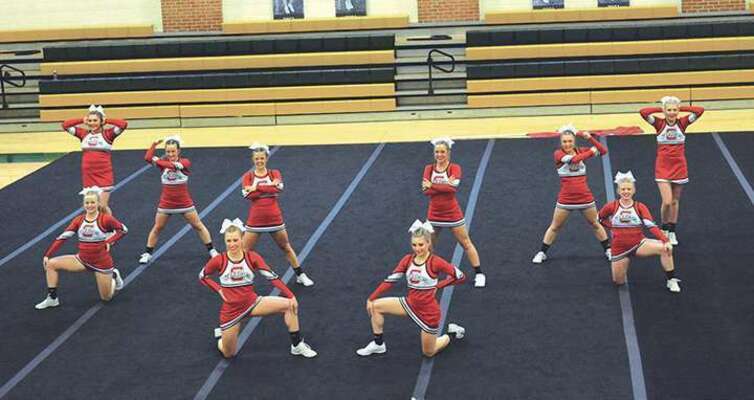 The Lady Warrior competition cheer team strikes a pose during their only regular season competition. SUBMITTED PHOTO
Previous Next

Just three years ago, Central sideline cheer head coach Amber Boggs asked if she could start a competition cheer team. After winning the Region 2D championship for those three years and being the Class 2 runners-up for the last two years, the Lady Warriors upended all other teams to bring home their first state championship.

A very emotional Boggs is more than pleased with her team’s effort in this COVID-shortened season.

“Well, we were all crying,” Boggs said. “We were so thankful. We have just put so much into it for three years.”

Competition cheer requires a big commitment. The athletes practice and condition six days a week, often two or more hours each day. Boggs admits she is stringent with her team. This year, that has paid off.

“I’m so strict. I’m so hard on them, I’ll admit it. When we won, I told them that this is why I am so strict,” Boggs said. “I have always pushed them to be the very best they can be and this right here shows why it is worth it.”

COVID-19 has truly affected the Lady Warriors cheerleaders. The first home football game of the season against John Battle was cancelled due to the Trojans being in quarantine. Then, the cheerleaders were put into a 10-day quarantine before Abingdon game on March 5. The quarantine spilled over to the Gate City game on March 12, which was the last regular season home game for the Warriors.

“It was very difficult. As a senior, I was devastated. This is one of the highlights of being a cheerleader. When we found out we were quarantined, it was very hard. But, it made us grateful for what we have,” senior captain Chloe Shupe said.

“Thank God our boys made it to the playoffs, otherwise we wouldn’t have been able to cheer this year,” Boggs said. “I told them that all things happen for a reason.”

The Lady Warriors’ first and only regular season competition occurred just days after the quarantine expired. Boggs advised that going from practicing six days per week to not practicing for 10 days left her unsure, but the team stepped up their game in a hurry.

“We had less than a week to practice and we had still not hit the routine exactly,” Boggs said. “In the competition, we had one shot and we hit it perfectly.”

The state semifinals was different this year with only four teams, Region A, B, C and D champions, competed. After the Lady Warriors posted the best score in the semifinals, they advanced to face off against King William for the championship. Unlike most sports where semifinals and finals take place on different days, the team had about 10 minutes to prepare before taking the floor for the finale.

“I reminded them that this was a new round. The score is zero. We have to focus, start fresh and give it 100 percent. We didn’t even really have time to celebrate,” Boggs said. The Lady Warriors posted an 11 point margin in the victory.

“This year was definitely special,” senior captain Katie Kiser said. “We really are a group of 10 best friends. A lot of people don’t realize cheer is a really tough sport mentally and physically. We all leaned on God all season and we knew every tough thing that happened, He had a reason for it. We’re so happy to have Amber and Kendra (Maggard, assistant cheer coach for the last five years) as a strong foundation for our program.”

“Our coaches really took this year head-on,” Shupe said. “They know our strengths and weaknesses and were able to put together one of the best routines I have ever seen. They do so much extra stuff behind the scenes. They’re just awesome.”

The Lady Warriors will lose five seniors this year, but their state championship will always remain in the trophy case. For Boggs, it’s more than just a trophy.

“It has been amazing to watch these girls grow up and become women. It (cheerleading) teaches them to learn how to work through differences you face in life and always put your team first,” Boggs said. “They love this sport, but more importantly they’ve bonded with each other. When you join cheer, you become a family.”