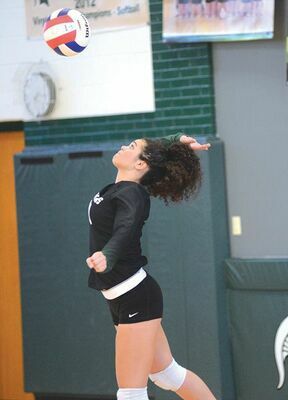 Leci Sensabaugh eyes the serve as the Lady Spartans defeated the Lady Warriors in the Region 1D semifinals. PHOTO BY KELLEY PEARSON 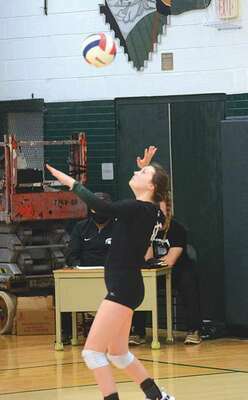 Lexi Love served up two big aces in the fifth set to get the momentum back for the Lady Spartans. PHOTO BY KELLEY PEARSON 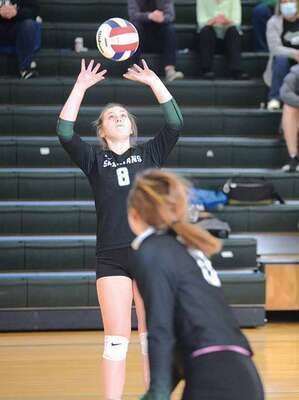 The Lady Spartans’ Tinley Hamilton sets the ball for the front line. PHOTO BY KELLEY PEARSON 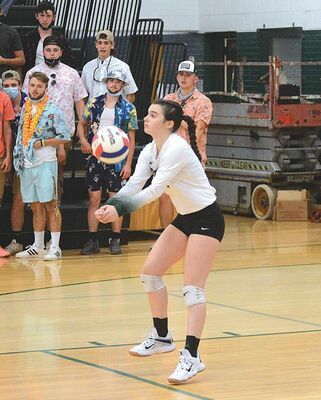 Kacie Jones keeps the Lady Spartans in it against Chilhowie Thursday. PHOTO BY KELLEY PEARSON 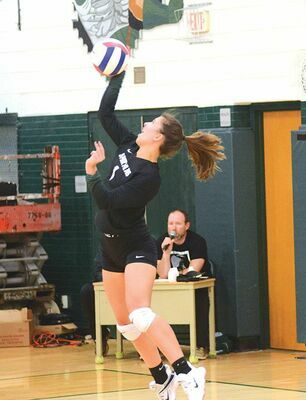 Ginevra Borchi shows off her arm cannon against the Lady Rebels. PHOTO BY KELLEY PEARSON 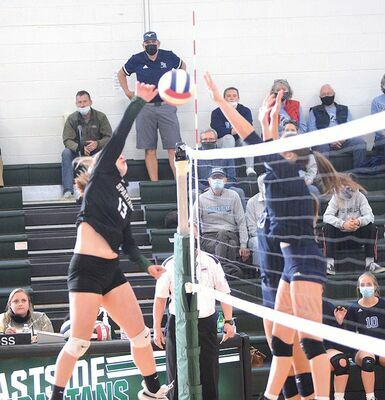 The Lady Spartans’ head coach Brianne Bailey totally expected to face off against the Lady Rebels, who have knocked Eastside out of the last two Region 1D volleyball tournaments in the semifinal round. This year, the teams were on the opposite sides of the bracket and truly the two best Region 1D teams fought for the championship.

“After we won the conference, we found out we were opposite them. We just had to get by Chilhowie and that would be who we would face,” Bailey said.

The Lady Spartans defeated Patrick Henry 3-1 in the beginning of the season, but the Lady Rebels were without a key player at the time.

“We beat them the first game of the season, but I knew they didn’t have the younger Maiden sister. She made a huge difference and she hurt us the most tonight,” Bailey said.

Eastside was stunned early in Thursday’s semifinal game as the Lady Warriors jumped out to a 2-0 lead. Bailey was proud of her team for fighting back.

“Chilhowie came out and attacked us with their serves,” Bailey said Thursday. “They kept us out of transition. We struggled staying in rhythm. They came out and played a heck of a ball game. But, I’m just so doggone proud of my girls.”

The teams split the first two sets, forcing a fifth and final set. The Lady Warriors came out swinging and the Lady Spartans went down as much as 9-2. At 11-5, it was Lexi Love’s turn to serve. Love started with an ace off the net, followed by another well-placed ace in the back corner, forcing a Chilhowie time out.

“When I walked out on the court, I knew it was my chance to get us back in this game,” Love said. “So I just went out there and gave it my best. My team helped keep me calm by just talking to me like they always do.”

“In that third set, we got so far down,” Bailey said. “The fought and they believed in themselves. I couldn’t be prouder.”

Bailey did not think that the previous night’s two-hour-plus volley-brawl contributed to the Lady Spartans’ demise. The Lady Rebels won the first two sets by very slim margins at 25-23 and 27-25.

“Those little moments show the difference in a team that plays year-round versus a team that started in March. A lot of them play club ball and they’re just used to that,” Bailey said.

The Lady Spartans were forced to alter attacks in the game as Patrick Henry presented a strong block up front. Whited and the front line hitters were forced to try more lobs and placement shots when strong spike attempts failed.

UVA Wise commit Whited also celebrated her 1,000th dig, which she had achieved during Thursday’s game. She had already attained 1,000 kills in her career.

“Anna’s a smart player and in my opinion, she is the best player all-around player in the region,” Bailey said. “Her serving, defense, blocking and hitting. She does it all for us,” Bailey said.

“With the big block, you have two options: hit through it and use it to knock it out of bounds or go around it,” Bailey said. “I feel like we did a very good job the first two sets and if some things would have gone our way, the outcome could have been different.”

The loss was the only defeat for the Lady Spartans on the year.